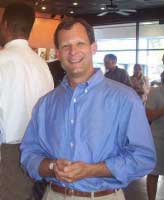 Andy Stetelman, SIOR, GRI,  was born in Hattiesburg, Mississippi in 1960.   He graduated from Hattiesburg High School in 1979 and received a Real Estate License in 1981.  He earned a Bachelor of Science Degree at the University of Southern Mississippi in 1983 with an Emphasis in Paralegal Studies and a Minor in Criminal Justice.  He obtained a Real Estate Brokers License in 1983.  In 1990 Andy graduated from GRI School and received its designation.

Andy Stetelman has served on the Hattiesburg Area Association of Realtors' Board of Directors since 1986 and served as its 1992 President. He was chosen as Hattiesburg's Realtor of the Year in 1992 and as the first Mississippi Commercial Association of Realtors' Realtor of the Year in 2001.  He has also served as director, secretary, treasurer and vice-president.  He has participated in all activities of the local Board, including Parking with Your Neighbors and the Blood Drive.  Andy attends Parkway Heights United Methodist Church. He has been the Chair of the Lake Terrace Convention Commission from 1995 to 2019. He also was the Federal Political Coordinator for Congressman Stephen Palazzo, the 4th district.